Beside the Dark Pool 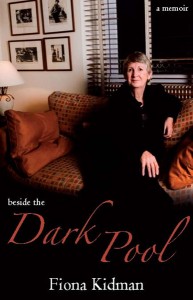 Beside The Dark Pool
Memoir — Vintage 2009

Synopsis: Beside the Dark Pool is the second volume of a two-part memoir, taking up the story of my life from 1980, where  At the end of Darwin Road ends. The 1980s began in dramatic fashion with demonstrations against the Springbok rugby tour of New Zealand. My husband Ian and I were both caught up in these events, and Ian tells part of the story, in eye witness accounts, in the first two chapters. He also tells the story of his life in an Auckland slum-dwelling known as Paddy’s Puzzle during World War 11. This building is the setting for my novel of the same name  Paddy’s Puzzle.

My life had entered a new phase, as I had become a well-known writer after the publication of  A Breed of Women, a novel which reflected on the change in women’s lives in the 1970s. Tens of thousands of these books were sold, and I became more deeply involved in the literary life of New Zealand and also met many international writers, including Nobel Prize winner Patrick White, the British writer Fay Weldon, and Angela Carter, with whom I had a close friendship in the last years of her life. I began to travel widely, and this book gives an account of early journeys to Europe, Nova Scotia, Canada, where I stayed for some time while researching my novel The Book of Secrets, and Asia. In Asia, Ian and I entered Vietnam and Cambodia at a time when these countries were struggling to recover from wars and genocide. In Cambodia, we met the late Sir Peter Ustinov, who played a later role in my life.

The book takes the writing of Marguerite Duras as a framework for the way I came to view the world beyond New Zealand. A Vietnamese-born Frenchwoman, she is a writer whose work I have long admired, and to whom I have been able relate some aspects of my own life. Duras’s last home in France, which I have visited, has a large dark pool beside it, which I’ve used as a metaphor for ‘the dark pool’ of the imagination.

Story Development: The book has a forward chronological drive. The life and work of the French writer Marguerite Duras creates a framework for recounting my own personal experiences and travel in Asia and France.

What the critics said about The Book of Secrets:

‘I was enchanted by Beside the Dark Pool. As well as the dazzling prose there is the author’s frankness and honesty about all aspects of her life.’ Beatties Book Blog

‘This latest instalment is just as engrossing [as ‘At the end of Darwin Road], a rich mix of anecdote, diary entry, narrative, literary reflection, along with social and political history….It’s a book in which recollections and incidents are consistently offered to the reader with an objective, factual scrutiny enriched by the author’s well-recognised superlative prose. ‘ NZ Herald

‘Kidman’s recounted experience as daughter, niece, wife, mother, grandmother – through 30 years of work, career and family tensions, political activism, writers friendships and feuds, eldercare, childcare – seems carefully judged. Nonetheless her services to literature now include a self-giving that goes beyond her championing of writers and the written word.’ Listener

‘Moments of decision. Standing on a lonely shore and experiencing the vastness of opportunity, the smallness of safe places. Choosing a heroine, a model or making your own important contribution – never mind the opposition – and coping with the fallout later. The abandonment and exhilaration of standing on the front lines of protest. Love. Friendship. Grief. And lines poetry always to hand.’ (With thanks to Paradoxical Cat blog)

‘The stuff of her family is incredibly moving -Fiona’s relationship with Ian [he contributes some marvellous stories directly to the narrative] especially their trips overseas together, and especially trips to Asia. A visit to Greece to find her son’s birth father is another highlight.’ (With thanks to Mary McCallum who launched Beside the Dark Pool at the French Embassy in June 2009)

‘This is a courageous book, with a clarity of description and an acceptance of her own foibles and those of others, that moves the reader to a deeper understanding of the circumstances described.’ Manawatu Standard

Permanent link to this article: https://fionakidman.com/beside-the-dark-pool/