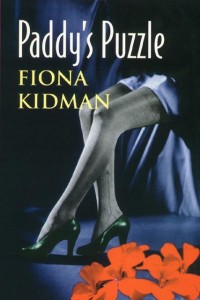 Synopsis
Clare Bentley grows up in Hamilton during the Depression, mainly cared for by her older sister Winnie. Winnie is conservative and in Clara’s eyes dull. When life goes wrong for Clara, she goes to Auckland to look for work, and finds it in a chocolate factory. The chocolates represent sweetness and excitement, particularly as they are rationed for the troops, and forbidden to the locals.

Clara becomes ill, and has to give up work. She goes to live in Paddy’s Puzzle across the road and there, she is cared for by her lover, Ambrose, a black American soldier. The choices she makes about love and leaving, and eventually about life and death are central to the story and its themes.

Story development: I knew someone who had lived in a real old building known as ‘Paddy’s Puzzle’ in Parnell, Auckland, during the 1940s. It was built by Paddy Gleeson, a hotel keeper with a wooden leg who used to ride around his several building sites on horseback. He worked on the building for seven years but never finished it. The erratic nature of the plumbing (water sometimes ran from the lavatories into neighbouring baths) earned it the name of Paddy’s Puzzle or Gleeson’s Folly. The stories I was told about this place, with its crumbling concrete, unfinished passageways, and strange history, took hold of me. During the war, Paddy’s Puzzle was home to the poor, and also for prostitutes whose clients were American Marines. I saw the building once in 1963, just before it was demolished, standing opposite the chocolate factory in Cleveland Road.

(also published in the US by W.W. Norton as In the Clear Light)

The ebook is available

Awards: Paddy’s Puzzle was short-listed for the New Zealand Book Awards. It has been in print almost continuously since its publication in 1983. The current edition is a Vintage, Random House publication.

What the critics say:

‘The supple flow of Kidman’s language is a pleasure to read. She’s particularly alive to the sudden swelling of emotion just below the surface of a carefully worded conversation. And she tosses off startlingly true images in the most offhand manner.’ San Francisco Chronicle

‘Shrewdly balanced between earthy tenderness and the dreadful trauma of disillusionment: a grave yet limber narrative-and a very welcome import.’ Kirkus Reviews

Permanent link to this article: https://fionakidman.com/paddys-puzzle/