Songs from the Violet Café 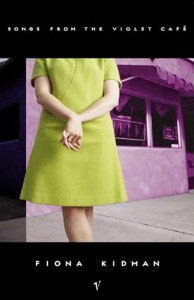 Synopsis: Violet Trench is the autocratic owner of the Violet Café, located in a tourist town in the North Island. Her staff consists mostly of young girls who have difficult home lives. Violet believes she can make a difference to them. She rules them with a rod of iron, ‘for their own good’. Her cook is a beautiful slim-hipped young Chinese man, called John Wing Lee. It is here, and to these people, that Jessie Sandle, comes unexpectedly, one spring evening, after having run away from her home in Wellington. Her life will be changed forever.

The young people in the cafe work late, live separate lives from the rest of the townspeople and see themselves as having something of a law of their own. A tragedy strikes that will scatter the group around the world. Jessie leaves behind small town disasters and takes on the world stage, as she becomes a foreign correspondent in Asia. In war torn Cambodia, the past she had thought she had left behind, comes back to haunt her.

Story Development: When I was a young woman I was deeply influenced by the French writer Marguerite Duras, who believed that the direction of peoples’ lives were essentially formed by the time they were in their late teens. Their value systems, she said, would be in place.

On the whole, I believe that too, which is probably why I write so much about the lives of young women. It doesn’t mean, of course, that people can’t change and grow, but I think we have defined our view of good and evil, right and wrong, by the time we enter our twenties. I’m really interested in the influences which shape these beginnings, and where lives will go from there on. I am also very interested in food and café culture, so I decided to place this new novel in a café in the 1960s, and follow the lives of the staff up until the present.

What the critics say about Songs from the Violet Café:

“The novel sweeps across half a century and travels around the world and back again. It is a work of vision and maturity that tells a compelling story with a lightness of touch and a delight in the sensuous things of life -food, clothes, sex – that help the reader to assimilate its larger, more sombre purpose.” Weekend Herald

“‘Songs from the Violet Cafe is a fine book beautifully written. From the “uneasy earth” of Rotorua to the “immense bright terrifying landscape” of Cambodia, the novel’s settings are vivid and adroit. It contains much potential sensation – domestic violence, illicit sexual connections, deaths and disappearances, and the desolation and venality of a country at war – but there’s also a wry humour, every intense emotion and extreme event filitered through Kidman’s cool precise prose.” Dominion Post.

“Fiona Kidman is a novelist writing at the peak of her powers….The ease with which Kidman weaves together the different characters and locations of her story would be sufficient to set this novel apart, but it is her depiction of the larger shadows hanging over her characters’ lives that gives this novel its real billiance.” Canvas, NZ Herald

“This wonderfully evocative novel..has been well worth waiting for. Fiona Kidman’s characters are rich in personality, and the carefully observed details of their lives and behaviour – as well as the landscapes and times they live in -bring a sense of depth.” Next Magazine

“Songs from the Violet Cafe is a work of consummate skill. Like a maker of fine lace, Kidman twists each thread of her plot – leaving some dangling while she gathers up others, weaving and criss-crossing each other until they meet to create a superbly crafted centre piece.” The Daily Post (Rotorua)

“Kidman is at the peak of her considerable powers. This is a cleverly structured novel, converging upon the central episode in much the same way as scientists have the universe contracting to a dense hole which explodes and expands again. At its heart is the power of sexual love.”John McCrystal, North & South

“Fiona Kidman’s new novel is fresh, innovative and quite unique amongst the current crop of New Zealand novels…From the very first page, there is a sense of narrative mystery overlaid with a sense of regret for the passing of time that I found profoundly moving. We are given graphic glimpses into multiple lives that somehow connect and part, then come together again, verymuch in the same way that layers of memory are built up into remembrance of times past. A terrific read.” Beryl Fletcher, Waikato Times

Permanent link to this article: https://fionakidman.com/songs-from-the-violet-cafe/