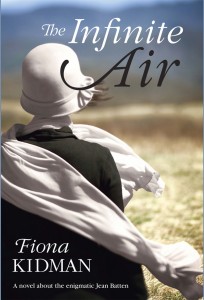 Synopsis: Aviator extraordinaire and international icon, Jean Batten was as elusive as she was glamorous. One of the world’s most courageous and daring aviators, she broke “men’s records” and became a legend. But who was Jean Batten and why did she die in obscurity in Majorca; lost to the world and buried in a pauper’s grave until a film crew came looking for her, some five years after her death?

The Infinite Air is an intriguing and evocative novel that delves into the life of one of New Zealand’s foremost heroines, uncovering long-held secrets and mysteries which Fiona Kidman only discovered during the reading and research she undertook in order to write the novel. Her meticulous approach rewards the reader with character insights and intrigues that would otherwise never have been brought to the page.

Jean Batten grew up and was educated in Auckland, the daughter of a dentist and thespian mother, and sister to two older brothers. She was a talented pianist and dancer, but a rare meeting with Charles Kingsford Smith and the pull of the ‘infinite air’ ultimately proved too strong, and aviation claimed the young woman. Jean’s passion for flying took her from Auckland to Sydney and then on to London, where she and her mother Nellie lived in impoverished circumstances, scrimping and saving for her flying lessons so that she might attain the ultimate prize – her pilot’s licence. Even before she became a pilot Jean had her sights set on a record-breaking solo flight from England to Australia. But flying is an expensive past-time and Jean had no plane and few resources. What she did have was charm, beauty and education, all of which brought her into the orbit of high society; people with money and influence. Before long, Jean had borrowed a Gipsy Moth biplane and planned her record-breaking route.

After an inauspicious start, in which she encountered bad weather and mechanical failure, Jean had to abandon her first solo attempt, and then her second. It only made her resolve stronger and in May 1934 she successfully flew solo from England to Australia in just 14 days and 22 hours; beating the existing record set by English aviator Amy Johnson by more than four days. The accolades flowed and Jean Batten became an international celebrity, often to be seen in public, shimmering in white silk – her signature attire – sipping champagne. But behind closed doors Jean Batten struggled with her celebrity and, as shown in this novel, sank into bouts of depression and loneliness, retreating from the public gaze whenever she could. When the outbreak of World War II put an end to her flying career and her fiancé tragically died in an airplane crash, Jean slipped from view altogether, living the life of a recluse in Europe with only her mother by her side. But her quiet life in a Caribbean villa was not without its dazzling moments. While there, she mingled with the rich and famous, including Noel Coward and the infamous Ian Fleming, with whom, Fiona suggests, she had an affair. Living out much of her life in Tenerife, with occasional forays into the world including a return trip to New Zealand, Jean eventually died in obscurity in Majorca.

The Infinite Air is an arresting novel by one of our best-loved writers. Kidman’s rich and textured palette readily evokes all the high-octane glamour, energy and dangers of early aviation, and the capriciousness of family, friends and lovers. Significantly, her novel captures the spirit of Jean Batten as she has never been seen before.

‘It’s always rewarding when women meet in Kidman’s fiction, and there are excellent moments here as they support, condescend, manoeuvre.’ Read more from David Hill’s review in NZ Herald.

‘Kidman’s beautiful prose and textured characterisation help us experience the freedom of flight, the whoop of joy heard over the roar of cantankerous engines, the sheer miracle of breaking the bounds of gravity.’ Read more of Elizabeth Heritage’s review on Booksellers NZ

Permanent link to this article: https://fionakidman.com/the-infinite-air/

Fiona writes about Jean Batten in The Express, UK