The surprise honour was presented at the home of the French Ambassador at a celebration of Dame Fiona Kidman’s latest book – Beside the Dark Pool, the second volume of her memoir.

The purpose of the honour is to recognise significant contributions to the arts, literature, or the propagation of these fields.

The function at the home of French Ambassador Michel Legras and his wife Marlise was packed with Fiona’s friends and family – with many familiar faces among them: writers like Patricia Grace, Vincent O’Sullivan, Marilyn Duckworth and Kirsty Gunn. I was lucky enough to be there, too, and was as surprised as any when the charming and unpredictable M. Legras announced the honour his government was bestowing on Fiona. There was an audible gasp, Fiona seemed to sink a little at the knees, and I noticed a few whose eyes filled with tears at the sight of the speechless Dame, now a knight. 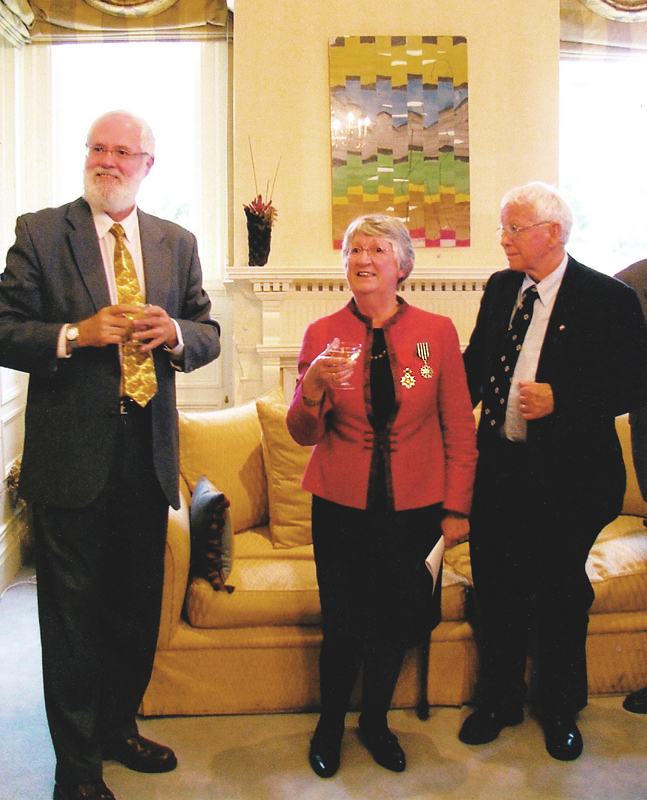 Receiving the Legion of Honour

Afterwards, Fiona said a few words of thanks to the Ambassador and others who’d helped the book on its way, and her husband Ian stepped forward and stood beside her with his trademark impish grin.

The Ordre des Arts et des Lettres (Order of Arts and Letters) is an Order of France, established on 2 May 1957 by the Minister of Culture, and confirmed as part of the Ordre National du Mérite by President Charles de Gaulle in 1963.

This is the only the second Chevalier in New Zealand, the first being Miles Rogers for his services to music, Fiona Kidman’s is the first for literature.
The most recent writer internationally to receive the honour is J.K. Rowling. Sebastian Faulks is also a Chevalier.

(Several New Zealanders have Ordres at varying levels. There is no feminine of Chevalier so Kidman has to be a Knight.)

At a later ceremony, the Ambassador presented the medal itself, and added another surprise by also bestowing  a second knighthood, the Legion d’Honneur (French Legion of Honour).

Permanent link to this article: https://fionakidman.com/300-2/