On & Off the Track with Fiona Kidman 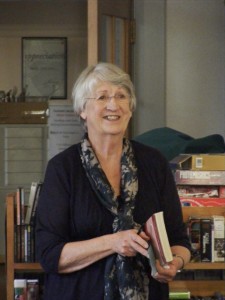 I’ve just done a rail tour on the Main Trunk Line for New Zealand Book Month, stopping at small towns along the way for readings and conversation.

The tiny Taihape Library is tucked behind the Council office façade on the main street, a street built wide enough for bullock wagons to turn around. The library is an original Carnegie one c. 1912, with matchwood lined walls and high pressed steel ceilings – and thoroughly modern systems. The locals had filled the room with overflowing vases of flowers. Come evening, the place was packed. The local ukulele band played ‘If you were the only girl in the world’ (I wish!). The library staff had brought out the Mayor’s chair for me, but I was bit lost in it, so I stood to read. After the talk and some book signing, there was wine, and sausage rolls the way they use to make them.

Among the audience was gorgeous Lisa Vasil who, with her Dad Con, runs the Taihape Motel where I stayed, across the road from the railway station. Lisa wrote Just an Ordinary Kid, named one of the One Hundred Best New Zealand Children’s Books of the 20th century, when she was just 14, plus several other titles, later in the 1990s. I hope she will write more when the time is right for her. I spent time with one of the part-time library staff, Kate Buckley, an Irish artist, widely exhibited in Ireland and Europe, who has come to live in Taihape (for love, of course). There is something unexpected and wonderful about coming across the studio of an international artist on a deer farm up a country back road.

Further up the track, in Otorohanga, the talk was held in the St John Ambulance Hall, and again there were writers in the audience, Elizabeth Lancaster, co-author of Who’ll Stop the Rain? (about Agent Orange) and shortly to be published novelist Danielle Hawkins, whose first book Dinner at Rose’s is due out from Allen & Unwin in May. 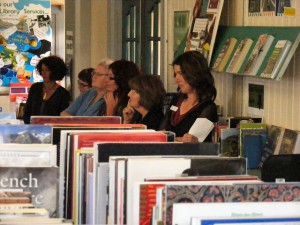 Audience at the library

At the end of the talk I was given some sunflowers. In Otorohanga they grow sunflowers around the edge of the maize fields. A touch of Provence in the King Country. The formalities over, librarian Sarah Osborne and twelve high-spirited women bore me off to dinner at The Thirsty Weta pub.

As book tours go, this was the best of times.

Permanent link to this article: https://fionakidman.com/on-off-the-track-with-fiona-kidman-2/