At the End of Darwin Road 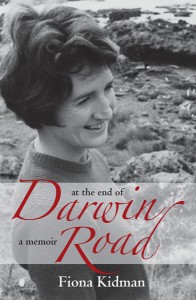 At the end of Darwin Road
Memoir, Vintage 2008

Synopsis: At the end of Darwin Road is volume one of a two-volume memoir. In this book, I trace my early life in small-town New Zealand. Born in Hawera to restless, hard-working parents, I follow our lives together through the Waikato, Kerikeri in the Bay of Islands, the Nova Scotian settlement of Waipu, and Rotorua. When I was working in Rotorua’s public library, the desire to write that I had as a child crystallized into a conviction that I would become a writer. The second half of the memoir follows my life throughout the 1960s and ‘70s as I juggled motherhood and family responsibilities with numerous writing jobs, and lived through turbulent times of change for women. These would eventually lead me to write my first published novel, A Breed of Women, hailed as a breakthrough in contemporary women’s writing. Its success came at some personal costs. The book ends around 1980, shortly after the book’s publication.

In 2006, I was the Meridian Energy Katherine Mansfield Fellow, resident in Menton. There I found surprising parallels with Kerikeri, where I lived ‘at the end of Darwin Road’, the place which most significantly influenced my early desire to write. The town became a contemporary framework from which to view my early life.

Story development: The framework of Menton provided me with the opportunity to look back at New Zealand as if through a lens and shape the novel with more of the perspective a writer brings to bear on a novel. In many ways, I felt like a character.

“Fiona Kidman finds the extraordinary in the ordinary, taking her fairly conventional Kiwi life and spinning it into gold.” Margie Thomson, Next

“The more I read, the more I realized, that this book is so much more than the story of one of our celebrated writers – it is a social commentary of the times as well as a very honest personal account of Kidman’s experiences. She pulls no punches, doesn’t pretend that life is always easy, nor does she reveal any tendency to self-pity on these pages.”  Mandy Evans Marlborough Express

“She moves beyond family history to share reflections on 45 years as a modern woman writer, stating that: “What I have to tell is largely a personal narrative about how I came to inhabit a fictional world.’ This is like the autobiography of Mansfield that we do not have….Kidman also celebrates the significance of her very special partner (Ian Kidman), gives bracing insights into adopting children and acknowledges female role models.”  Bruce Harding The Press, Christchurch

“In this book, At The end of Darwin Road, we have Fiona’s own revelation of the person behind the writing – and as would be expected it is original but not self-absorbed, honest without parading the sensational, or showing vindictiveness. It is reflective, perceptive and encompasses all aspects of life, not just artistic concerns. It is a story fascinating in itself, but also one that gives us a greater understanding of her writing. It is a story in which many women, in particular, will see reflections of themselves.” Owen Marshall, launching At the end of Darwin Road at Circa Theatre, March 14 2008

Permanent link to this article: https://fionakidman.com/at-the-end-of-darwin-road/