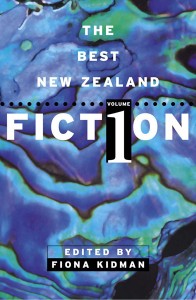 Synopsis: The Best New Zeland Fiction: 1 is a collection of new writing by a blend of established and new writers.It is planned as an annual anthology which will demonstrate the very best in recent new writing. They have been selected by Fiona Kidman, with an Introduction to the stories by her.

What the critics said about The Best New Zealand Fiction:1

Dominion’s Book of the Week

‘The rising stars are here too. Morey’s “Tide” is an elusive and engaging experiment. Craig Marriner’s “The Evolution”, which I take to be an extract from his forthcoming novel, leaves you hungry for more. And newcomers Katie Henderson and Tracy Farr acquit themselves well.

It is fitting that the two best stories are by a senior and an emerging writer respectively. Vincent O’Sullivan’s “Pictures by Goya” is a magnificent piece of writerly control. And James Georges “Walking to Laetoli”, the real show stealer, masterfully tells the story of how the relationship of the narrator and his father is repeated in his relationship with his son, shot through with the leitmotif of that haunting pair of of fossilised footsteps at Laetoli, a symbol of how learned behaviour may become ossified and ourselves doomed to repeat them.
The best indeed – a real treat for spring.’ John McCrystal, Dominion

‘To a large extent, the success of The Best New Zealand Fiction 1 is due to its editor, Fiona Kidman. Her role is all about choice, and she seizes the opportunity it gives her to bring together an exciting assortment of established and younger writers and their work. Collectively, the effect is a vibrant compilation of stories, one that augurs laughter and awe in equal measure.’ Siobhan Harvey, Herald.

Permanent link to this article: https://fionakidman.com/best-new-zealand-fiction-1/