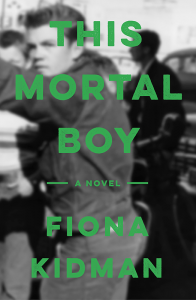 A novel based on real people and the real events that led to one of the last executions in New Zealand.

Albert Black, known as the ‘jukebox killer’, was only twenty when he was convicted of murdering another young man in a fight at a milk bar in Auckland on 26 July 1955. His crime fuelled growing moral panic about teenagers, and he was to hang less than five months later, the second-to-last person to be executed in New Zealand.

But what really happened? Was this a love crime, was it a sign of juvenile delinquency? Or was this dark episode in our recent history more about our society’s reaction to outsiders?

Black’s final words, as the hangman covered his head, were, ‘I wish you all a Merry Christmas, gentlemen, and a prosperous New Year.’

This is his story.

‘…when Kidman shows us Black at his most vulnerable, he and the novel are magnetic.’ Read more from Damien Cave at the New York Times

‘Some books stick to you. This compelling novel is one of them. Beautifully crafted, meticulously researched, with ample attention to the grittiness of life and both the kindness and cruelty of people. I adored it.’  Read more from Paula Green on NZ Poetry Shelf

‘Kidman doesn’t just take readers into the courtroom or the viewpoints of main players – killer and victim, lawyers and judge – but goes broader and deeper. We get a holistic view of a life summarised by history as a single violent act. Or two.’  Read more from Craig Sisterson’s review in The Listener

‘The most impressive aspect of this deeply moving novel is Kidman’s control of the facts. She lets them speak for themselves, never intruding an authorial viewpoint.’  Read more from Steve Walker on Stuff

‘An engaging aspect of this novel is Kidman’s portrayal of the wide circle of individuals who are affected by Black’s conviction and trial.’ Read more from Tina Shaw’s review on The Spinoff

Permanent link to this article: https://fionakidman.com/this-mortal-boy/

The launch for This Mortal Boy at Unity Books

An interview with Belgravia Books, London

Listen to Fiona's Public History Talk about This Mortal Boy on the New Zealand History podcast: