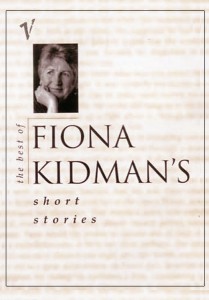 Synopsis: The Best of Fiona Kidman’s Short Stories contains 37 stories, some previously uncollected, and some new, written in the period 1968-1998.

Those that were previously collected appeared in Mrs Dixon and Friend, Unsuitable Friends and The Foreign Woman (Mrs Dixon and Friend was short-listed for the New Zealand Book Awards, and The Foreign Woman for the Montana New Zealand Book Awards). It includes “Hats”, perhaps Fiona Kidman’s best-known short story, about the respective mothers of the bride and groom at a wedding and how they express their anxieties about the marriage in a dispute about their hats.

The new stories are “Old and Constant Friends”, about a school reunion, and two love stories, “Habits of Love” and “Tell Me the Truth About Love” (with thanks to W.H.Auden for a great title).

The book in brief: ‘Sometime in the mid 1960’s I began to write short stories. With youthful enthusiasm and, I see, looking back, only a limited expression of the form, I wrote them as practice for the longer undertaking of a novel. It was not long before I began to write them in earnest, for their own sake. In those early days, I wrote everything with a passionate abandon which now looks like the work of another person.
…..People often ask how the decision is made to write a short story rather than a novel. I find this hard to answer. Stories come to me whole, like poems, so there never seems to be a major problem to solve. You listen to a story in your head, and it has a sort of musical intonation, something that tells you that this is its shape. And then you do it. I’ve never written a short story that turned out to be a novel…Writing short stories remains the purest form of creative pleasure for me.’

(from “Introduction” to The Best of Fiona Kidman’s Short Stories)

What the critics say about Fiona Kidman’s short stories:

‘With delicacy, precision and a rare, poignant sense of humour, Fiona Kidman dissects the moral confusion of the narrator [in ‘At the Lake So Blue’], as she tries to come to terms with herself as “different”. The sun, the sex, the ignorance, the particular pain of being young are recollected so sharply that I defy any reader not to be thankful that he/she is no longer at this uncertain age….What is unfailingly delightful about this collection is that the author constantly presents a fresh and authoritative view.’ Melbourne Age

‘The triumph of this collection is the final group of stories; the language is so unselfconscious, and Kidman’s interest in childhood, memory, self-empowerment, creates a shock of recognition in the reader, but also suggests an essential loneliness at the heart of human affairs.’ The Evening Post

The story “Needles and Glass” is a short film directed by Miranda Harcourt and Rawiri Paratene. It has just been shown at the Montreal Film Festival.

“Hats” has been optioned by Bushcraft Films to make a short film.

Permanent link to this article: https://fionakidman.com/the-best-of-fiona-kidmans-short-stories/