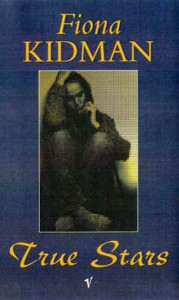 Synopsis
Who is trying to scare Rose? This gripping novel is a vivid portrayal of New Zealand in the 1980s.

True Stars shows the tensions and divisions in 1980s New Zealand, which were echoed both on a national level and in family relationships, which were crystallised by the 1981 Springbok Tour, and which gnaw at differences in race, gender, class – and politics. It is a savage and often humorous novel set during the last months of the Lange Government.

‘With True Stars, Fiona Kidman has become the foremost chronicler of our times.‘ – Roger Hall, The Dominion

Permanent link to this article: https://fionakidman.com/true-stars/