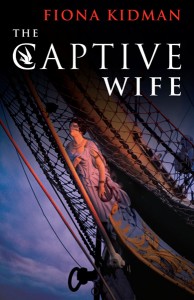 Synopsis: When Betty Guard steps ashore in Sydney, in 1834, she meets with a heroine’s welcome. Her survival during a four-month kidnapping ordeal amongst Taranaki Maori is hailed as nothing short of a miracle. But questions about what really happened slowly surface within the elite governing circles of the raw new town of Sydney.

Jacky Guard, ex-convict turned whaler, had taken Betty as his wife to his New Zealand whaling station when she was fourteen. After several years and two children, the family is returning from a visit to Sydney when their barque is wrecked near Mount Taranaki. A battle with local Maori follows, and Betty and her children are captured.

Her husband goes to seek a ransom, but instead, England engages in its first armed conflict with New Zealand Maori when he is persuaded to return with two naval ships. After her violent rescue, Betty’s life amongst the tribe comes under intense scrutiny.

Based on real events, this is a compelling story of a marriage, of love and duty, and the quest for freedom in a pioneering age.

‘A clever beautifully written novel, The Captive Wife reminds us what an intelligent and skilful writer Kidman is…..Fiona Kidman: the words have come to mean terrific fiction underpinned by a sound female conscience. If The Captive Wife is anything to go by, Kidman’s luminous literary standing is assured for many years to come.’ – Siobhan Harvey, NZ Herald

‘This is a belting good read. The plot whacks along. Settings are true and tangible; style gritty and satisfying. Betty fair kicks her way off the page.’ – David Hill, The Listener

‘This book is an example of the best in New Zealand historical – Mike Crean, The Press, Christchurch.

‘In short, Kidman’s characters are marvellously flawed and thoroughly human. They lie and cheat at every turn because that is how they ensure their own survival…it’s timely that Kidman should return to the genre -and wonderful that she has done it with such aplomb and verve.’ – Kelly Ana Morey, The Dominion Post

‘[Kidman] has a marvellous natural ability of climbing into her subject’s skin, absorbing their thoughts, mannerisms, lifestyles, vocabulary of the times and turning them into characters that hook readers into their minds and souls.’ – Jill Nicholas, Rotorua Daily Post

The idea for The Captive Wife came to me about 10 years ago when I was researching an article for New Zealand Geographic magazine about the Cook Strait area. I had heard the story of Betty Guard many years earlier, from my husband Ian, who had worked as a school teacher on Arapawa Island. Visiting the area brought that story to life in my imagination.

As usual, I had a whole pile of stories and commitments waiting in the queue to be told. I knew this one would take a great deal of research and I kept putting it off. But in 2003, I successfully applied for a grant from Creative New Zealand, which afforded me the time to visit the several places where the story took place, including Sydney, and the pa sites on the Taranaki coastline, before setting to work on writing the novel.

I toyed with several structures and finally opted for a method by which Jacky and Betty could each tell their stories in the first person. Jacky’s story is told in the form of a journal, in much the same way that I imagine he would have kept logbooks. In fact, he left no written records behind.

For Betty, I invented an imaginary friend in the guise of Adie Malcolm, her school teacher at the Rocks in Sydney. I liked Adie’s eager, waspish voice and offered a great opportunity to explore what Sydney was like in the 1830s.

Permanent link to this article: https://fionakidman.com/the-captive-wife/